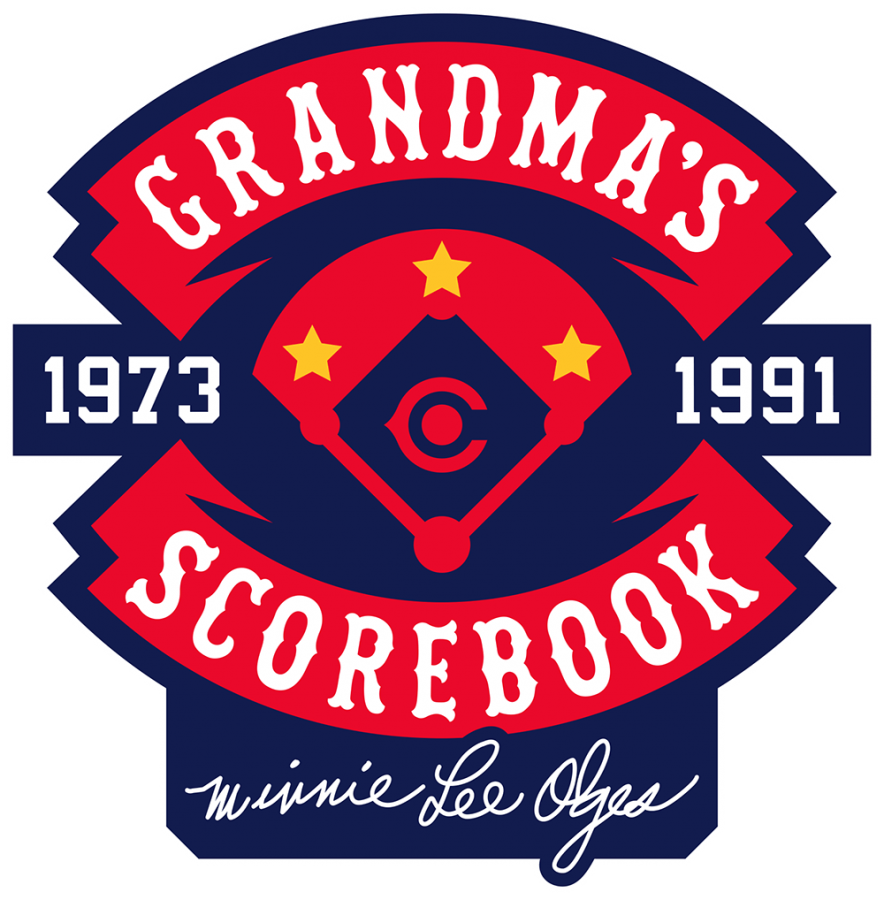 Minnie Lee was passionate about three things, her faith, her family, and the Cincinnati Reds. You can clearly see this throughout her scorebooks. Her notebooks were much more than a scorebook, they became her journal. She lived alone and didn’t have cable TV, but she did have her radio. Each game she tuned in to listen to Marty Brennaman & Joe Nuxhall. When she started keeping score in 1973, it was Al Michaels and Joe Nuxhall and starting in 1974 it was Marty & Joe.

Her love for baseball and the Cincinnati Reds wore off on me and we created a very special bond. I’m Mike Murphy and Minnie Lee Olges was my grandma and baseball buddy. We were truly blessed that she lived seven houses down the street from us. Starting at the age of 6, I would ride my bike to her house each morning and I placed my face up against her screen door, and would holler in at her, “Hey Grandma did Johnny Bench hit a home run last night?” This would be our routine each morning, sitting at her table and looking at her majestic scorebook.  She would often make us something to eat, like a pimento cheese sandwich or she would make us a cup of hot Postum.

When she would open up her scorebook, I would immediately look for Bench. When I found his name, I would scan across looking for H, because this is how she marked a home run. There were two things I didn’t want to see on his line, a Sto (strikeout) or a PO (pop out).  She would distinguish a pop out (PO) from a flyout (Flo). A pop out was made by a catcher or an infielder and a flyout was made by an outfielder.  In my young mind, a pop out meant that the player wasn’t even able to hit it to the outfield. I remember asking her, “Grandma, he couldn’t even hit it to the outfield?!” She would tell me that I needed to appreciate the W’s, which was a walk. I would say to her, “Grandma, that means he didn’t even hit it!” She would counter with one of her favorite sayings, “Honey, a walk is as good as a hit.” I learned to appreciate the importance of a walk as I grew older and started playing baseball myself.

Grandma never had a drivers license, so this allowed for many opportunities for us to get to spend a tremendous amount of quality time with each other. She would ride to church with us every Sunday morning. We would take her to all parties, family reunions, doctor appointments and the grocery. Some of my fondest memories were the weekly trips to the grocery with her and my mom. I would always ride up front between them in our Oldsmobile. I would get my weekly allowance of .25 cents and I would buy a pack of Topps baseball cards. On the drive home I would open my Topps pack sitting next to Grandma. I’m absolutely certain that she looked forward to this each week as much as I did. I vividly remember opening packs from that 1978 Topps set, looking solely for Cincinnati Reds players or players with that spectacular red, white, and blue All-Star shield. If I didn’t get a pack with a Reds player or an All-Star, she would do her best to lift up my spirits by telling me about the other players and their strengths.

The 1978 Topps set is when I became hooked on collecting baseball cards. There are two specific cards from that 1978 Topps set that will forever be my favorite baseball cards of all time. The first card was # 350, Steve Garvey. The Dodgers were my little league team at the time, and Garvey was a Dodger. He also resembled my dad with those big hairy, Popeye-esque forearms.

The other card was #354, Cesar Geronimo. He was a Reds player and I remember asking her who he was. When she read his name to me, Cesar Geronimo, it was mystical. I made her repeat his name many times on that drive home. Cesar Geronimo sounded like the name of a movie star to me.

When she began keeping score in April 1973, it started out on the back of an envelope, then on a college basketball scorecard she had laying around, to individual sheets of paper, and finally in a dedicated notebook on June 9th. This was also Dan Driessen’s MLB debut. You can see next to his name on her scorecard that she wrote, “Cobra’s 1st start”. There were two Cobra’s that made their MLB debuts in that 1973 season, Dan Driessen and Dave Parker. The Reds had two Cobra’s in their clubhouse for part of the 1984 season, until Driessen was traded to the Expos in late July.

Each year for Christmas, we would get Grandma a three section notebook and a package of pens so she would be ready for the upcoming season. For many years, my family would allow me to be the one to give her that annual gift on Christmas Day.

In her 1979 scorebook you will see that there are no World Series games between the Baltimore Orioles and Pittsburgh Pirates. As I was looking through her 1979 scorebook many years after she passed away, I found a note dated Oct. 9, 1979, the eve of Game 1 of the World Series, “I’m giving up baseball this year and praying Mike can adjust to school and really enjoy it so he will be anxious to go each morning. Please God!! Do help him. Thank you!!” She was well aware of my anxiety and lived through it with all of us. We can see in her scorebooks that she really loved the MLB postseason and I’m sincerely humbled that she gave that up for me.

After Johnny Bench retired in 1983, I had to find another favorite catcher and that was Gary Carter. In 2007, I was looking through her 1986 scorebook and I came across a note she left me after Game 7 of the ALCS when the Red Sox beat the Angels to advance to the World Series against the Mets, “Now for World Series!! Mike, I’m hoping your Mets Win!! I know you are pulling for them, I am too. Ray Knight is an Ex-Red. I’d like for McNamara’s team to play well too. He is an Ex-Coach of the Reds.” She knew I would be looking through her scorebooks so she left me a love note.  She passed away in 1996 and I found it eleven years later. Looking through her scorebooks has been a very emotional and yet truly fantastic Easter egg hunt.

During my high school years when I visited with Grandma and when we would look through her scorebooks together, I told her that I wanted her scorebooks when she passed away. She would smile and she assured me by saying that she didn’t think it would be any problem. I watched her stack of scorebooks grow each year and I knew there were 1,000’s of incredible moments in Reds history on those pages. When I did finally get the time to look deeply into her scorebooks, I was not ready or prepared emotionally to process everything that I found written on those scorecards. It was and it still can be an overwhelming cathartic experience.

She left behind exceptionally detailed artifacts of baseball history infused with her humbleness, a wonderful sense of humor and her uncanny sense of capturing the moment. She not only kept score, she filled her pages with notes about family visits, commentary of the fights, fans falling out of the stands, static on her radio, going to bed because she had church the next morning, baking apple pies, making vegetable soup and canning peaches.

We can see in these scorebooks, how strong the connection can be between this beautiful game of baseball and its fans. She wrote a 3,000 page love letter to baseball over 19 years, and this website is my love letter back to her. She took great pride in keeping such precise detailed stats on her scorecards and I tried to honor her, by paying just as much attention to those same exact details while developing this website. It was my goal and a driving force to capture that attention to detail throughout this labor of love. When she passed in 1996 and I gathered her scorebooks, I knew I wanted to eventually do something with them but I didn’t quite know what it would look like. It took 26 years and a global pandemic which allowed me to have time to dive deeply into her work and to complete this dream of mine. I can finally look at her stack of scorebooks and say, “It is done.” I sincerely hope this website does her justice.

Thank you for visiting this website and taking the time to read to this point. I hope you can feel her spirit and passion when you are reading through her scorecards. I humbly ask that if you do enjoy this content, to please share this website with your family, friends, and baseball fans so that her story can be heard.

Grandma, I love you and I miss you and Fluffy dearly.